Love this story. If only it were true. | Amazing Online Hoax Welcomes &quot;Washington RedHawks&quot; To The NFL https://t.co/qNvrY41h27 via @deadspin @NFL #Football #America

Back in December, some creative person thought up a new logo for the Washington Redskins, built some fake news sites that looked quite authentic, and for a brief moment the NFL’s newest team was the Washington Redhawks. Same colors, similar overall look, minus the offensive name and logo.

Of course, that wasn’t the first time someone had re-imagined what a culturally appropriate logo might look like. This design below is a remarkable logo suggestion for a team that doesn’t have an offensive name but for some reason chooses to maintain their logo. 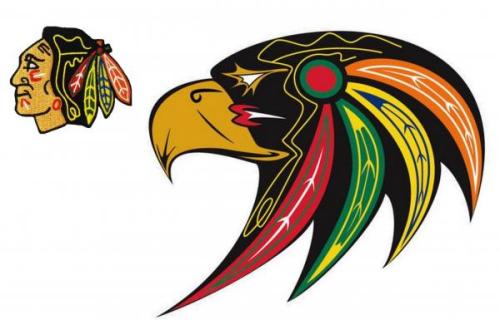 So what follows is really not a new idea. That is creating (or in this case slightly modifying), a logo and imagining a re-branding. However, in light of the recent announcement by Major League Baseball’s Cleveland Indians to remove the Chief Wahoo (I don’t even like saying that), from the Jersey’s or anywhere around their stadium, Progressive Field. Unfortunately there will be no ban on selling Wahoo gear.

It’s a step forward for advocates for the change but the name itself still has to go.

If we look at the logo, the text ‘Indians’, the mascot, and even the nickname ‘The Tribe’, I thought why not just change the mascot slightly to remove the red skin and feather, and let that inspire a new name.

Giving the lad a star-studded bandanna and some funky hair, not to mention a skin color change, makes him look like your average Joe. Maybe his nose can be adjusted, and a few other tweeks, but I did all of this with Visio and Irfanview so please excuse this artistic hack job. Especially my Cleveland text below.

Next, we have the Indians text which is a really cool font. We could make the city name Cleveland as the main text used and adopt the style of their original logo.

How do you trademark the name ‘Indians’ anyway?

Imagine an actual graphic artist did this with the right color too.

The new mascot, Johnny Rocker, could be a really cool and non-controversial mascot, giving the team, City, the fans, and a league plagued with this controversy for decades a new start.

Picture JR doing air guitar throughout the stadium, lip syncing with a mic in his hand, getting on stage with before or after game music acts or at a halftime show at a Browns game.

Reminiscent of both Major League and The Drew Carey Show (imagines ‘Cleveland Rocks’ chants throughout the ballpark), the possibilities of nick names, outfits for the mascot, memorabilia, etc are endless.

Then there is the nickname ‘The Tribe’. How about ‘The Band’ as in band together or a group of people that make it all come together like the players, coaches, owners, and fans. ‘I’m in The Band’ or ‘I’m with The Band.’ “Let’s get The Band back together.”

New Seventh Inning Stretch song? How about The Band with Dr. John – Such a Night. Or, is the other team having a rough night, how about Stage Fright by The Band as well.

I put this together in a few hours, with no consultation with fans or the Indigenous community. This exercise of engaging both these communities should take place in our opinion.

Why aren’t teams changing names and logos? I am sure change isn’t cheap and re-imagining a popular brand is not desirable, but it’s the right thing to do in 2018. It can be an exercise that brings everyone together in a meaningful and life changing manner.

I love baseball. I love football. I love hockey. I love sport, but I want to love it with my whole heart and there is so much about professional sport that has long weened that love. This issue of offensive names and mascots is big on that list. I am sure I am not alone.

Let it feel good to just be a fan again. Come together. Make the change.